I have invented Salesman Repellent.

Salesmen lurk inside stores in the mall, buzz around the isles in consumer electronics outlets, and hide behind signs in used car lots, waiting to descend in swarms on unsuspecting victims. For years I’ve been trying to develop a solution to this scourge.

First I tried to ward off attacking salesmen by backing away while shouting defensively:
“I’m just looking!”
This used to work, but modern salesmen have developed a resistance to this defense, and it no longer has any effect on them.

I tried being rude:
RadioShack Salesman: “Dude, can I help you?”
Me (raising an eyebrow): “I doubt that very much.”

I even had a custom T-shirt made that said “No, you CAN’T help me” and I’d put it on before entering danger zones. This just seemed to attract the pests; they flew in undeterred.
Furniture Salesman: “Hey, that’s a great t-shirt! So, looking for a new mattress?”

But finally I happened on the perfect formula. It works by using an ingrained behavioral mechanism that even the most bloodthirsty salesman can’t break. It seemed too good to be true, so I tested it. It worked in appliance stores. It worked on Apple Store salesmen. I even braced myself and did a field test at a car dealership. After the initial approach, the salesman veered away and did not attack!

At first I thought I’d patent my salesman repellent and make millions. But then I realized the invention was too important to the progress of mankind to keep it to myself, so I’m giving it to you, free of charge! Here it is: 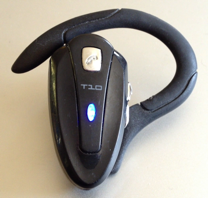 I know, it’s just a bluetooth headset. That’s not the brilliant part. The brilliant part is how you use it. The headset doesn’t need to be expensive. It doesn’t need to be functional. Heck, you don’t even need to own a phone! Keep it in your car, and before you go into a store that you suspect may be infested with salesmen, put the headset in your ear. As you enter the store, say something obvious out loud.
“I’m going into the store now!”

If a salesman does approach you, don’t panic. Do not make eye contact, and say something that he can’t possibly interpret as conversation aimed at him.
“You want me to check for what?”
Salesmen have a built-in inhibition against interrupting a cellphone conversation and will immediately back off. Very aggressive salesmen, such as the ones who inhabit used car lots, may need an additional treatment. Hold up your palm toward them, cup your other hand to your ear and say,
“What? You’re breaking up.”
The salesman will veer away.

If multiple salesmen swarm, you may need to repeat the deterrent action, but soon they will retreat, hover at a distance, and wait for you to finish your conversation. Of course, you never finish it. You can browse the merchandise peacefully, and every thirty seconds or so, say out loud,
“Uh-huh. Sure. Okay.”
Keep doing this until you leave the store.

I know at this point you want to hand me money, but honestly, letting the world know about salesman repellent is reward enough for me. You’ll see me at the next Nobel prize awards ceremony. I’ll be the one surrounded by a circle of reporters, cupping my hand to my ear and shouting,
“I’m going into the store now!”